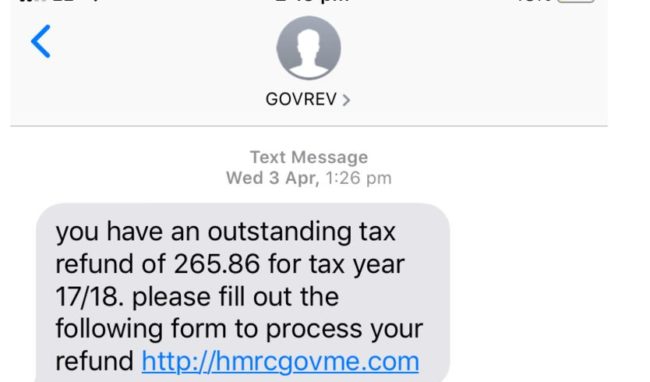 Earlier this month John, who believed he was due a tax refund, received a text message from “InfoHM”. He followed online instructions, and unwittingly provided personal and bank account details to online fraudsters.

HM Revenue and Customs (HMRC) is now warning young adults to be wary of such phone scams. Because younger adults typically manage their finances via their mobile phones, they can be particularly susceptible to an approach via text message, HMRC warns.

John says the page he was directed to was “the spitting image” of a gov.uk site. After entering his national insurance number and date of birth, it informed him he was due a credible sounding rebate of £462. He ended up providing details including his bank details and even his mother’s maiden name. John reported the breach to HMRC and Action Fraud, and has since put in place extra online security on his accounts.

The HMRC says it never requests bank details by text or phone, and that it is shutting down hundreds of sites a week associated with these schemes, which are known as “phishing scams”. If you receive one of these emails or texts, don’t respond and report it to HMRC so that more online criminals are stopped in their tracks. Scammers also use phone calls, voicemails and emails, which may contain computer viruses designed to copy personal or financial information.